Before Edwards County EMS was organized in 1977, the only patient care rendered was by untrained volunteers who had no equipment except a Chevrolet station wagon housed at the local hospital. Often a driver was the only person going on a ambulance run and he was usually a hospital maintenance man or local citizen who could spare the time.

Seeing a community need and work being done in surrounding areas, some local Edwards County citizens traveled to Camp Wood in October 1976 to attend an Emergency Care Attendant course. Those attending the course received 24 hours of training in patient care. The first ECA course in Rocksprings was held in October of 1977. There were 17 people who completed this course.

This group of excited volunteers started raising funds for an ambulance. Fund drives by the Future Homemakers of America and donations from the Fair Association began this effort. Letters were mailed to land and business owners requesting donations. The memorial card program was initiated and many fund raising events were held. In July 1978 the first ambulance arrived. 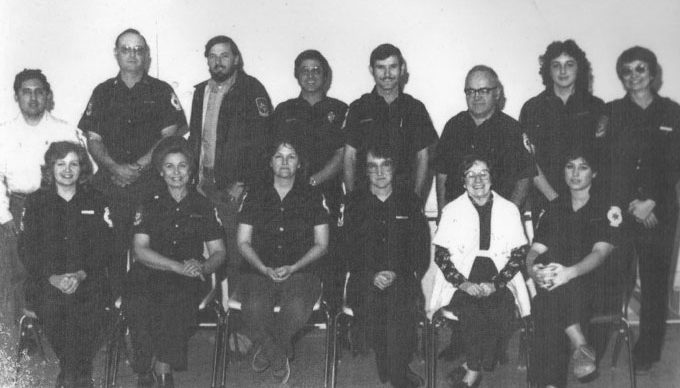 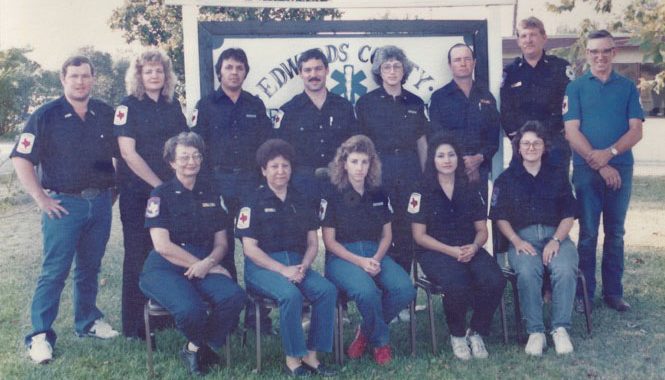 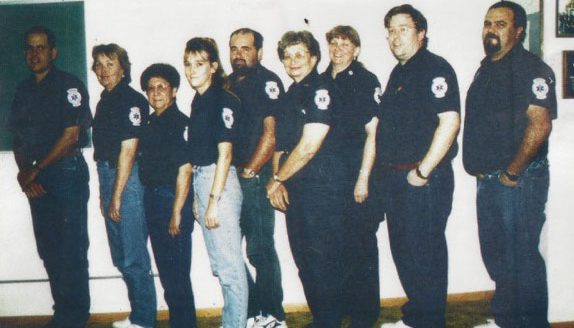 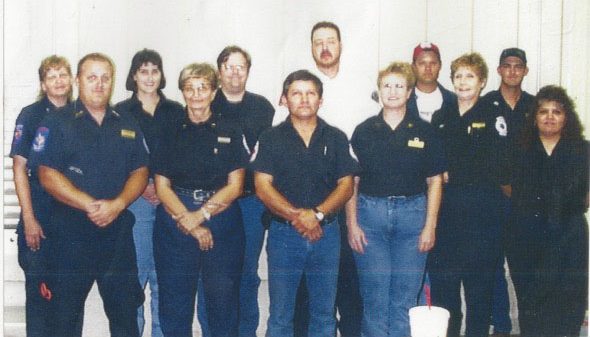 By 1982 many of the initial members had moved away or were ready for new people to take the reins. After an ECA class in the spring of 1982 the service began the process of reorganization. New officers were elected. They were President – David Prather, Vice President – Pauline Erekson, Treasurer – Paula Epperson, Secretary – Bonnie Leather and Reporter – Denise Erekson. Monthly skills meeting were established and a run schedule was adopted with members divided into 3 on-call teams which alternated weekly.

Four EMS members heard of an upcoming EMT class in Kerrville and decided they would travel three nights a week to complete the 120 hour course. Those dedicated individuals were David Prather, Pauline Erekson, Irving Leather and Denise Erekson. After completing the EMT course, David began taking the paramedic course in Del Rio. He traveled to Del Rio every weekend until he completed the 160 hour course in March of 1983. David still holds the distinction of being the only Edwards County resident to complete the EMTP certification that worked with Edwards County EMS.

In 1986 the hospital closed. The EMS had been based in the hospital so the closure brought many changes. Now EMS personnel would be dispatched by Sheriff’s office dispatchers. Instead of taking patients to the local hospital for initial care, all patients had to be transported to area hospitals, the closest being 48 miles away. These longer trips took the ambulance out of service for at least two hours. Before the local hospital closed EMS ran about 40 calls per year. After the closure that number doubled. A second ambulance was needed.

In 1997, with the encouragement of county commissioners, Edwards County EMS incorporated and became a nonprofit organization. The first board of Directors consisted of Gary Gilmer, Charles Carson, Dick Herschap, Edward Gonzales, Ginger Wardlaw, Paula Epperson, Pauline Erekson, Wiley Rudasill and Carolyn Ramirez. Another huge change that year was the availability of helicopter transport for critical patients. In 1997, Baptist Airlife based in San Antonio began providing service to Edwards County.

In 2004 Edwards County EMS celebrated 25 years of service. What began as the vision of a few dedicated individuals is now a licensed EMS service with advanced life support capabilities. And these visionaries would not be surprised. They believed it was possible. 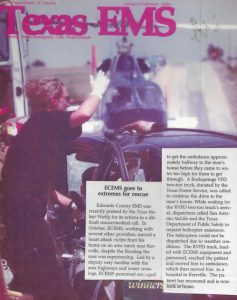 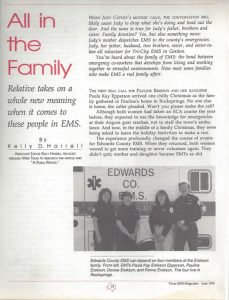 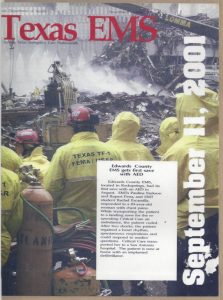